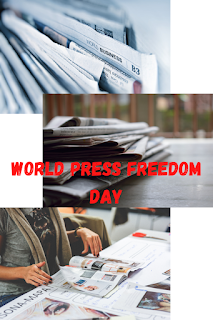 So it is a sleepy Sunday in the #Uk and most people have got their Sunday paper to read and discuss with family members or if on their own to find out more in-depth about what is going on in the world nationally and nationally.

They may also have the local paper delivered to find out what is going in the local area.

This happens in most countries and today is known as World Press Freedom Day.

Set up in 1993 by the United Nations to celebrate the freedom of the press and its ability to report on anything that it deems important. However, whatever and whoever it thinks is important.

There are so many forms of press these days too.

In 1980 the press began to move things online and as a student in the 1990s I was able to research topics that I needed to whilst doing my GCSEs and As levels at college. And now nearly everyone reads their news off the internet via some kind of technology. Whether it be a mobile phone, tablet, laptop or pc and everyone can be a journalist of some sort or another.

Before all this, though everyone got their news from the newspaper. You would see the latest about what happened politically, socially, both nationally and internationally. Although the news might be a day or two later than when it actually happened as getting it quickly meant actually getting people to interview people and get the information that was needed then writing an article on the topic in question.

Nowadays news can and is put out as it happens which can be useful yet at times can be dangerous because of things can be said out of context and make a situation worse.

A lot of the time it is because of the general public interest for gossip and famous people. At times some people want to become famous yet don't realise that their lives are under so much scrutiny these days that everything they do and say and can be misconstrued.

So my question is "What Is The Freedom of The Press?"

Before all this instant access that is a double-edged sword, there was the time that things were reported after being subjected to some kind of code of conduct.
Is this code of conduct needed now?
That is a question everyone should think about because

What would you want others to know about you?

Because every time you put information or anything on Facebook or the internet in any form anyone can search for you and know everything about you.

So now the question can be changed into these forms.

Because of these questions, it has been twisted at times particularly from the 50s and 60s to now, in the UK. I am not here to put blame on any form of the press but it comes from peoples greed of knowledge and gossip.


People are very social human beings but they also want privacy.  Yet these lines are blurred and things are being done and said that makes no sense except to make stories.

So is this code of conduct that was followed up until the 50s and 60s still relevant?

When isn't the point of the press though meant to be reporting the truth rather than telling stories full of half-truths.

Therefore isn't the code required to make people accountable to what is being said?

Rather than having the press in whatever form being sued for saying something that isn't true.

Understandably there has to be some sort of legal procedure too especially as information has been got in very dubious ways which shouldn't be appropriate.

Many papers have been sued for various reasons over the last 30 years because they got information in dubious and quite possibly illegal ways. Therefore having to close down or payout copious amounts of money or even both.

Unfortunately these days in some respect the fact that anyone can be press reporters there is so much crossed wires that no one seems to know the moral of right or wrong.

Another way of saying it would be what is truth or lies???

Also, the press can be swayed to support a particular political stance rather than just facts making the general public think the way the political party want them to.

So, for now, the question is "Is there need for the press in the formal sense of newspapers?".

I would love to know what you think about this topic.

at May 03, 2020
Email ThisBlogThis!Share to TwitterShare to FacebookShare to Pinterest
Labels: day, freedom, press, world